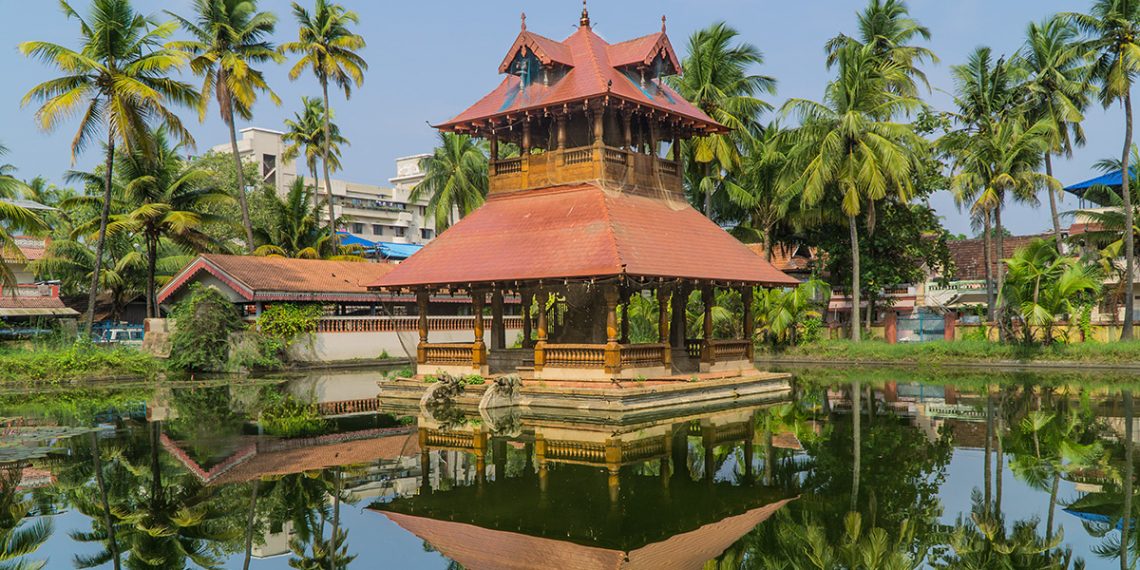 Last year, while preparing for an extended cruise that included India, I spent hours deciding on the perfect ensemble that would be comfortable as well as harmonious with our surroundings. I imagined my husband and myself gliding in and out of quaint spice, fabric and rug shops with the smell of incense wafting around us while gentle Hindu music played and we were greeted by the phrase “Namaste” everywhere we went. I finally settled on a pearl gray linen dress with long sleeves over which I would wear a saffron-colored pashmina. I selected a pair of linen colored espadrilles for my feet.

The morning we began the slow idle into the harbor at Cochin Port I was up early, and through the mist I could see men in small fishing boats casting nets upon the water. Stepping out onto our balcony for a better look, I was smacked in the face with reality in the form of heat and sticky humidity. When we finally pulled into our berth and I saw the mad tangle of tuk-tuks and portside peddlers, and heard the constant honking of horns, I pulled out a sleeveless top, a scarf to keep the sun off my head and lightweight slacks. Cochin was loud, bright hot and crowded. Sticking my feet into black sneakers, I cast a sad glance at the pashmina and made my way outside.

Cochin, or Kochi, is ranked the sixth best tourist destination in India and was the first European colony in what was to be known as Colonial India. The Portuguese, Dutch and British have all occupied Kochi and the influences of those cultures blend with the other pan-Indian communities within the region to create a diverse and harmonious population.

We braved the crowds and waded into the mass of people looking for transportation into the city. We decided if we could find a driver with an air-conditioned taxi, we would negotiate a fee for the whole day. We were swarmed by drivers all clamoring for our business and trying to steer us toward tuk-tuks and cars parked without consideration of how they would ever be untangled. We finally found a driver that wasn’t as pushy as the rest and who spoke understandable English. He assured us that his taxi had an air conditioner. Well, it had air conditioning. But we didn’t ask if it worked.

We told our driver, Shekhar, that we wanted to see the Cochin Thirumala Devaswom temple and the Chinese Fishing Nets. We were less interested in the more European structures such as the Bishop’s House, however, when I saw the beautiful Santa Cruz Basilica, I asked to stop. We walked around the perimeter, but I was drawn inside by the sound of a choir. I didn’t need to understand the words as all the honking and street noise faded and I realized I had stumbled into a wedding. The bride wore white, but her attendants were dressed in fuchsia silk saris. The church was packed with witnesses and family and I stood watching and listening for several minutes then wandered outside where a reception was being set up in a nearby marquee.

As our driver dodged in and out of traffic, I noticed that there didn’t appear to be established lanes. The rule seemed to be if there is a space, some type of vehicle must fill it. What might have been designed for two lanes of traffic could suddenly accommodate five lanes, if the vehicles were small enough. At one point my husband wanted to go to the other side of a temple to get a better camera angle. Instead of driving around the block, we backed up the way we had come for a several hundred feet. Motorcycles dodged us – some with six or more people piled on board. Family motorcycles with dad driving, mom riding sidesaddle and children sitting on mom’s lap and crammed between parents was a common sight. How the long scarves and saris didn’t get caught in the wheels was a mystery. The honking never stopped.

After we left the church, Shekhar asked if we would like to see a traditional laundry. A few minutes later we arrived at Dhobi Khana where traditional laundry methods are still practiced. The laundry is divided into three areas. The first area is a covered ironing shed. There are bundles of laundry sorted into piles, such as linen from hospitals and hotels waiting to be collected. At the far end, a wrinkled and skin-thin, bare-chested man wearing only a short lungi presses shirts with an iron box heated by pieces of burning coconut shell. He is 86 years old and has worked at the Dhobi Khana since age 18. The washing area is divided into 42 bays where men and women stand in water and pound and fling wet clothes against a flat stone. Water arches from the stone and tightly wound articles of clothing as they are flung and slapped over and over. After the clothes are beaten clean they are transferred to the courtyard where row after row of clotheslines dry the freshly laundered items. On the grass nearby large blue blankets lay drying in neat rows.

Following lunch we visited the Cochin Thirumala Devaswom Temple in Mattancherry. I was struck by its golden serenity as it sat among flowering water lilies where palm trees were reflected from a pond’s surface. I marveled that it had survived the noise, attempts at destruction and pollution since 1599.

It would be easy to focus on negative things in Cochin. Every structure that isn’t new looks decidedly down at heels and in desperate need of a fresh coat of paint. After three attempts at three different locations we finally gave up on the ATM machines. We saw many homeless people lying in areas shaded from the harsh sun and hordes of children trying to sell cheap items to unsuspecting tourists.

However, there seemed a gentleness and warmth that I rarely see when I’m traveling abroad. While watching the men haul in fish from the Chinese Fishing Nets, I struck up a conversation with a young man selling beads at a stall. He was curious about American politics, Arizona weather and Southern fried chicken. I was charmed. In the midst of all this noise and crowding, people smiled and met your eye. They loved to have their pictures taken. They acted like they were happy to meet you. Their gesture of waving a hand down by their side meant everything from “I’m coming right now” to, “wait there” to, “roll down your window.”

At the spice market the different types and colors of curry powder intrigued me. I loaded my bag with saffron, fresh nutmeg, vanilla powder, different curries and whole leaf green tea. The young woman who waited patiently while I asked question after question never seemed impatient. When I remarked that her outfit was lovely she asked me if I was interested in buying something similar and led me to a shop where I bought a beautiful red and gold salwar kameez. When I entered the shop, the clerk put his hands together and said, “Namaste.” Finally, in time to go home, I had arrived.

If you are planning a trip to India, you must have a visa. A travel agent can help you with this somewhat complicated task of selecting the most practical visa for your trip.

Late summer months are wet with monsoons that make the monsoons in Arizona look like a drizzle. Plan your visit accordingly. Travel may be less expensive in those months, but your visit may be quite unpleasant.

Recent changes in de-circulation and removal of all 500 and 1,000 rupee notes has resulted in 86 percent of the paper currency in India being useless. Removal of the larger bills is causing a shortage of smaller bills. Check currency conditions prior to arrival and determine if your travel plans will accommodate the use of credit cards or USD.

Victoria “Tori” Ward is a cruise and resort specialist with an interest in traveling and seeing the world since she first began to crawl. For more information on these trips and others, contact Tori at tori@roxtravel.com or 928-254-9968