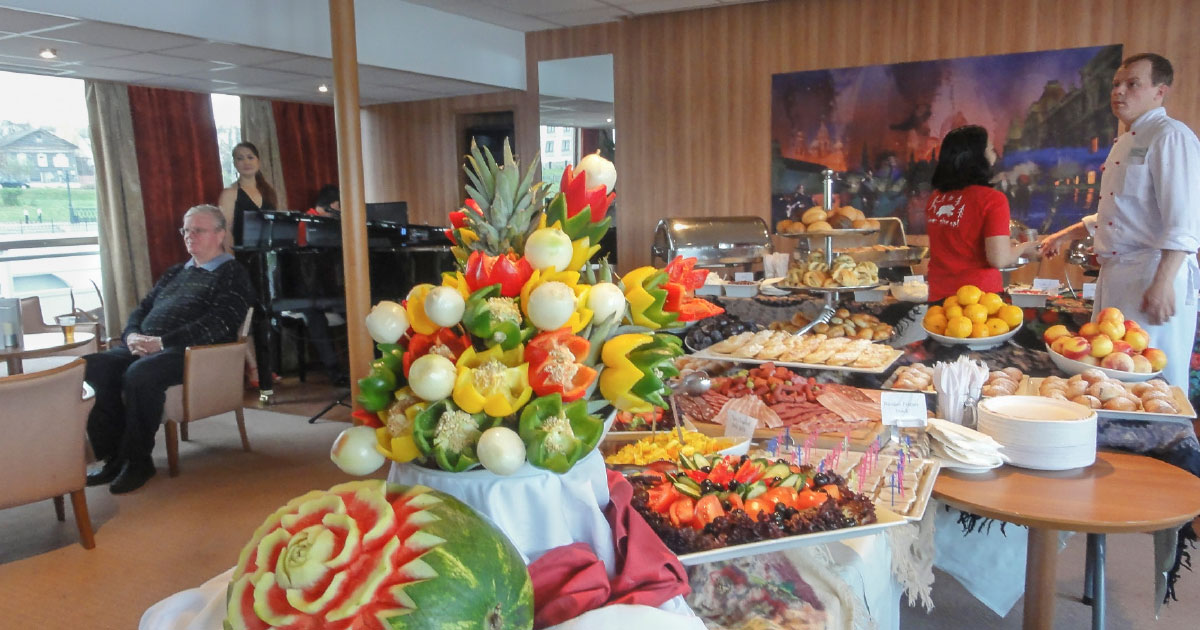 The rowing machine I was sitting on was located in the front of the ship, a repositioning cruise from Europe aboard a 3,600-passenger vessel. I had been on the machine for about 25 minutes when a fellow passenger tapped me on the shoulder and asked if I could row a little harder and get us out of these rough seas. It was an exciting crossing through the English Channel and across the Atlantic, which is notoriously choppy in October. I enjoyed the roll and pitch after days of very calm seas. However, looking around the exercise room, I noticed it was pretty empty. As “the spawn of Popeye,” which my husband calls me, I never get seasick, but even I admitted this was one of the rougher seas I have experienced.

When I talk with people about a cruise vacation, the top two reasons my clients give for choosing other travel options is they want to avoid large ships with lots of people and they are concerned about possible seasickness. If you are in either of these camps, then consider a river cruise.

River cruises are my absolutely favorite type of vacation. My first trip to Europe included a river cruise along the Rhine that featured one amazing castle after another. These castles were constructed centuries ago as defensive fortifications to protect the rich land around the castle from intruders. Since they were located along the routes of trade, the castle owners took advantage of their strategic positions to impose tolls on merchants. Although no longer collecting tolls, these castles remain guardians of the terraced vineyards along the river – full and verdant in the spring and summer and blushed with golden rust in the fall.

River cruising, by its very nature, provides you an upclose and personal look at the cities you most want to visit. The trade routes and posts established in ancient times have grown into some of the world’s most popular cities, which you can see from your balcony while sipping a cup of coffee or cool beverage. The rivers most navigated are typically smooth and calm. The ships stop in the heart of these cities, so that you spend your time seeing the sites, not traveling for hours to get someplace that only provides you enough time to grab lunch.

My husband and I took Viking’s Waterways of the Tsars cruise a couple of years ago. From St. Petersburg, we cruised along the Svir River eventually meeting the Volga and following it into Moscow. Instead of a few hours in St. Petersburg, or even a day, we had three full days to spend in this exciting and historic city, as well as three days in Moscow. We spent a half-day at the Kremlin, and returned at night to take wonderful photos. Our guides were knowledgeable and were with us from the time we were collected at the airport until they said goodbye in Moscow.

We wandered for hours through the Hermitage, the world’s largest art museum; spent one morning at the Winter Palace and the afternoon at Catherine’s Palace; and enjoyed a performance of Swan Lake that evening. It was a trip that included many extras, which would have been added charges on a cruise ship – cooking classes, guided tours, Russian language classes and many cultural performances.

Because the ship was small, we got to know many of our fellow passengers by name and enjoyed complimentary wine, beer and soft drinks. One of the nicest amenities was free Wi-Fi. If you’ve been on an ocean cruise one of the biggest complaints is the expense of having to purchase WiFi service and then the slow connection with the other thousands all trying to share the server. When clients reject a river cruise because of the cost, I provide them with my analysis that demonstrates they are very comparable in cost and the experience is generally much more fulfilling. Viking currently has early booking discounts that provide two-for-one pricing, plus extremely attractive airfare.

The destinations you are traveling to on a river cruise are the experience instead of the ship being the destination. The pace on a river cruise is just not as frenetic, with the cultural experience being showcased instead of overenthusiastic cruise directors pushing reluctant passengers into playing games they have no interest in, or entertainment and food offered in every public room, so that the only quiet place is your cabin.

If I am going to stay in my cabin I want it to be on an Avalon Cruise where the beds face the window as I lie back on my pillows like a queen and gaze at the lights of Budapest Parliament across the Danube River. Avalon Waterways currently offers savings of $2,500 per couple plus $299 airfare on select departure dates in 2018 for a 15-day cruise from Budapest to Amsterdam. Avalon’s fleets navigate rivers in Europe, South America and Asia.

If river cruising is attractive, but you want to stay closer to home, American Cruise Lines offers cruises along America’s famous and historical waterways such as the Mississippi and Hudson rivers on the East Coast, including some trips that are offered on a paddleboat. The Columbia and Snake rivers and Puget Sound and the San Juan Islands highlight itineraries in the Pacific Northwest.

Because river cruising has become so popular over the past few years, it surprises clients to find that some of the most sought-after destinations and coveted cabin space book up months and up to a year in advance. My advice to clients is to allow your travel agent to find the best deal for you, and book early.

In January, I will be returning to Paris for a week for my bi-yearly girlfriends’ trip. One of my friends has never been to Paris, so we are as excited to watch her reactions to my favorite stomping ground as we experience it all over again ourselves. She asked me, “Will we be able to take a night cruise on the Seine to see the Eiffel Tower, Norte Dame and all the sights from the river?” My answer: “Oh, honey, absolutely!” And, I promised we wouldn’t get seasick, and there will only be a small group on board.

If you’d like to learn more about river cruising, or have a destination you wish to explore, give me a call and allow me to help you sail away.

Victoria “Tori” Ward is a cruise and resort specialist with an interest in traveling and seeing the world since she first began to crawl. For more information on these trips and others, contact Tori at tori@roxtravel.com or 928-245-9968

Skiing in the Land of Deserts