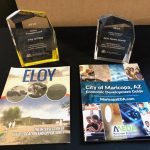 CASA GRANDE, Ariz. – OCTOBER 16, 2020 — Economic Development Marketing Brochures produced by RM in partnership with the City of Casa Grande and the City of Eloy in 2019 have been named finalists for the 2020 Golden Prospector Awards by the AAED.

Awards are scheduled for presentation at the AAED 2020 Virtual Fall Forum on Tuesday, October 27th. Finalists will learn whether they are receiving the Golden Prospector Award or the Award of Merit at the ceremony.

In 2016 the City of Surprise was the “Golden Prospector Award” winner for its
multimedia promotion of their program for “Bell & Grand Intersection – Business Retention.” RM was one of the selected vendors for this project, managing the social media and text messaging campaign for the promotion.

The Golden Prospector Awards were created by the AAED to encourage and recognize excellence in economic development.

RM is proud of the impact the publications will have in assisting with the responsible growth of the communities they represent. “It’s important for communities to tell their story to prospective businesses.”, said Elaine Earle, owner of ROX Media, “These guides highlight why these cities are top choices in Arizona, in a high-quality format.”

The Economic Development Marketing Brochures will serve as an introduction to Casa Grande and Eloy and serve as a “leave behind” piece for the economic development team meetings for these cities. RM also created digital marketing collateral suitable for email and preloaded on USB drives.

ROX Media is a multimedia organization that creates and provides media solutions, content creation, design services and project management expertise to our marketing partners and the organizations and industries which we serve. Learn more at ​www.rox-media.com