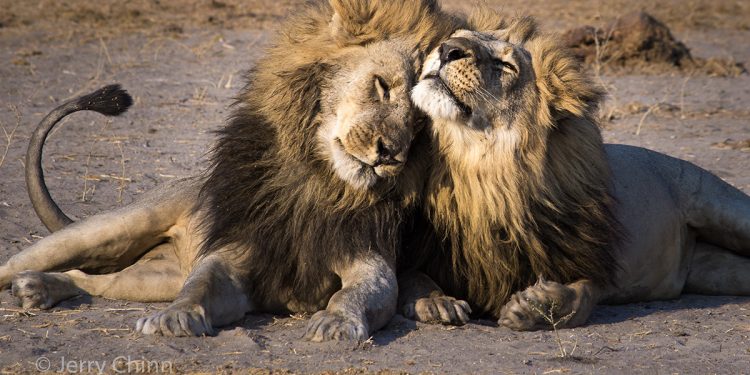 An abridged excerpt from the soon-to-be published book: “Confessions of a Safari Junkie”

I can’t determine what woke me each morning when we were on safari. Was it the crew preparing breakfast on the open-fire grill? Maybe it was the hippos with their belching grunts, or the last Morse code message of lion roars, which signal the end of their night prowling. Whatever the sound, my body responded with a smile in the darkness before rising to enjoy another day’s adventure.

We moved camp from the lush savannah around the Khwai River with healthy lions, who walked beside our Land Cruiser without so much as a yawn in our direction.  Wild-dog puppies played tug-of-war with fresh meat. Elephants, who welcomed us to the site our first night, came to visit during the day – practically touching us with their trunks. In three days along the river, we saw a dozen species of wildlife. Our guide was wonderful and the wildlife prolific.

We then moved to the Savuti – a stark contrast to Khwai – where animals compete for limited water and lion coalitions fight turf wars for territorial rights.

On our way, we stopped for coffee and three male elephants eating from a tree joined us.  We stood by the truck and the smallest of the three took a few running steps at a fake charge. Johnny, our guide, walked over toward a giant termite mound, and the largest elephant nonchalantly headed to the area. He decided to show junior how it was done, and kicked up more dirt and took bigger steps toward the unwanted guest.

We were only back on the road a short time when Johnny made a detour toward an open plain. We were off-road and suddenly saw what his trained eyes had caught. Lying at the edge of the plain, a lioness scanned the distance for predators or lunch. We soon realized that there were three cubs lying in the shade of a tree, not far from mom.

Later, we stopped for lunch and enjoyed a cold, but satisfying picnic prepared by the camp’s chef. She and the rest of the crew later waited for us with a hot supper and cold cocktails in our new digs. We had just poured tea when Johnny’s head popped up like a meerkat and he said, “Dump the tea; there’s a cheetah.” We jumped back in our seats as Johnny sped across the field. The cheetah was moving too fast to photograph, but slow enough to glance back in our direction.

The following morning we were on the road before dawn, and were rewarded when Johnny spotted a leopard lying in tall grass at the base of a tree. We returned to the Marabou Pan before adventures further afield, and were blessed with the site of brother lions enjoying a morning drink and grooming each other beside the water’s edge.

Victoria “Tori” Ward is a cruise and resort specialist with an interest in traveling and seeing the world since she first began to crawl. For more information on these trips and others, contact Tori at tori@roxtravel.com or 928-254-9968

Spain’s Architecture, Culture Second to None

Luxury Cruises Include More Space and Staff to Pamper You